One of the most highly appreciated characteristics by cannabis consumers around the world is the aromatic and flavor profile of their buds. This highly valued trait directly depends on molecules produced by plant trichomes: terpenes. In this post we’re going to go over some growing advice in order to get the highest possible aromatic potential from cannabis plants.

As we’ve explained in previous articles, buds in cannabis strains contain a proportion of terpenes that compose their aroma.

This percentage of terpenes is determined by the genetics in each plant. However, terpenes are highly volatile compounds (some more than others, as they have different densities and weights) and often times, part of them are lost due to growing errors or mistakes.

There are strains that tend to have more of an aroma than others. Strains such as Holy Grail Kush, Gipsy Haze or Critical Jack are safe bets for those looking for strong aromatic intensity.

This is an idea that is usually not considered by growers, as it’s the breeders’ job to select and develop phenotypes that are then placed on the market. The final aromatic content of cannabis flowers doesn’t only depend on its genetic makeup, it also depends on other factors to do with growing methods and environmental conditions that CAN be controlled.

In the following post we’re going to explain, step by step, the best recommendations to avoid making any mistakes in this regard.

Excessive heat is terpenes’ number one enemy, as these molecules evaporate with ease when they’re exposed to high temperatures.

In outdoor grows it’s much harder to control the temperature, but indoors this can easily be done with the right equipment (extraction system, air conditioning, if necessary, etc.).

The heat provided by the sun inevitably causes terpene loss. However, certain measures can be taken to keep plants’ roots cool so that they suffer as little heat as possible.

It’s important to control the temperature in grow rooms so that plants can grow correctly, and mature properly with their cannabinoids and terpenes at the perfect stage.

During the summer it can be especially hard to control the temperature in indoor grows, which is why growing at this time of year means that an AC unit will definitely be necessary in order to to conserve as many terpenes as possible and harvest decent results.

In order to stop plants from losing terpenes during the flowering stage, it’s extremely important to make sure that the temperature in the grow room doesn’t go over 26 degrees.

Excess humidity or letting plants dry out during the growing process can also cause terpenes to degrade (the same thing happens during the drying process).

Aroma and flavor loss, as well as certain fungi and insect infestations can be avoided easily with these precautions.

Avoiding heat so that terpenes don’t degrade is essentially just controlling the temperature so that it doesn’t go over 26 degrees. Sometimes, the growing area may be at the right temperature in general, but small pockets of hot air can form above cannabis buds; this causes flowers to lose terpenes in specific areas with hot spots.

This can happen due to various reasons, although the most common is because of HPS (high pressure sodium) lighting, which tends to let off too much heat. If this happens, the parts of the plant closest to the light will end up getting too hot and losing terpenes. Unfortunately, the flowers that usually end up closest to the lights are called the colas; the main stem and usually the most sought-after part of the plant.

Stopping Buds from Losing Aroma & Flavor due to Excess Heat

A solution to stop this from happening is to precisely calculate the distance between the light and the top of the plants. However, HPS lighting sometimes requires them to be lowered so the plants get enough light. We recommend paying special attention to the amount of distance between both elements, finding a balance between the two to find the perfect spot.

Leer ahora »  Terpene Vaping Effects, With and Without Cannabinoids

Another possible solution is to use LED lighting systems, which apart from saving on electric bills compared to HPS, also let off much less heat and therefore, help to conserve a larger amount of terpenes in plants’ trichomes. This makes for a more aromatic and flavorful cannabis of higher quality overall.

The type of fertilizer used to feed plants also influences the final flavor of theirflowers. While it’s true that they don’t necessary cause terpenes to degrade, certain products can modify and alter the flavor of cannabis buds.

The best way to go is to use 100% organic fertilizers, as they don’t interfere the same way that mineral products do. Have you ever encountered cannabis that was scratchy on the throat? This is most likely because mineral fertilizers were used instead of bio.

Plus, this type of cannabis plant nutrition allows cannabis plants to grow efficiently in all aspects, including a notable terpene improvement. The healthier and better grown the plant, the more aromatic it will be.

A simple practice that can increase the flavor produced by cannabis is to flush out their roots a few days before harvesting; this is done to get rid of leftover minerals and nutrients in the plants themselves.

Flushing or root flushing is essentially watering plants with large amounts of water on its own (specific products designed for this process can also be used) in order to get rid of possible nutrients that may have stayed back in the plants’ soil. This makes the plant use up and leftover nutrients in their leaves; a sort of plant detox, which improves the quality of the harvest by quality a lot. If this is done correctly and at the right time, the flavor and aroma of the plants and their flowers will be significantly better.

Like many things in life, it’s a question of choosing the right time when it comes to getting good results. If the roots are flushed too soon, the plants may end up missing out on certain nutrients that they still need, which can have a negative impact on this final phase.

On the other hand, if the roots are washed out too late, the plants may not have enough time to get rid of the nutrients that they’ve accumulated.

The approximate window for this period is around 15 to 7 days before harvesting, keeping in mind that each strain has a different flowering and maturation speed; their trichomes will need to be observed routinely see if they’re ready, when the trichomes start becoming hazy, it’s time to get going.

Do NOT touch the flowers

We know that that there’s nothing quite as tempting as flowers on a maturing cannabis plant that are letting off an intense aroma. However, even if your mouth is watering and you’re tempted to touch them and smell them, the general consensus is to avoid as much direct contact with the buds as possible.

Every time you touch trichomes, part of them ends up coming off and sticking to your fingers. This ends up causing terpenes and cannabinoids to disappear from the flowers.

So, what do you think? If you have any questions, let us know by leaving a comment below or getting in touch with our team. 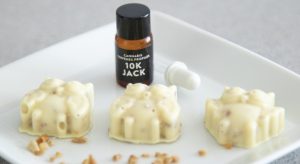 We’re back with a new edition of Cali Terpenes express recipes. Do you like cannabis and desserts? You’re in luck! Today you can learn this

How to Harvest, Dry and Cure Cannabis to Preserve Aromas

Terpenes are aromatic molecules responsible for the flavor and fragrance produced not just by cannabis, but also most other plants and fruits in the plant 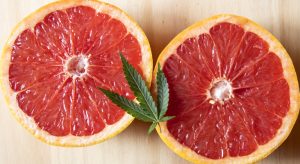 Grapefruit and Cannabis, What do They Have in Common?

In previous posts we’ve already talked about the interesting similarities between cannabis and many plants, flowers and fruits. Whether it’s because of their aromatic composition,